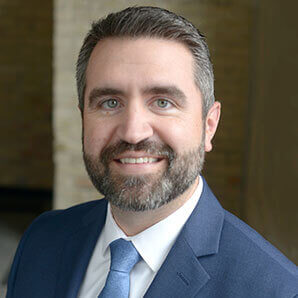 Being a BDD has unlocked a new drive in me. The ability to connect with others on a genuine level and help them solve their business problems is just the way I want to spend each day.

Hear from Nick Marvin, Business Development Director (BDD) in Chicago, about how this role was the right fit for him at the right time.

Ready for a change

Prior to Salo, my entire career was in accounting and finance. I started out in public accounting with KPMG, earned my CPA license, and then spent 12 years in finance leadership roles, supporting both corporate and client-facing initiatives. Despite some early success in my career, I could never let go of the fact that I chose to pursue accounting and finance for the stability, and not because I was passionate about it. The further I got into my career, the more it would eat at me. Then, in February of 2015, my second child, Andrew, was diagnosed with Leukemia at 15 months old and my outlook completely changed. His diagnosis was a life-changer for our entire family, and I realized that I was no longer willing to have a job that didn’t fulfill me.

When I committed to making a job change, I knew I wanted something where I was helping people and thinking strategically. The Business Development Director (BDD) role at Salo offered me both, along with the opportunity to leverage my accounting and finance background in a different way, but I was hesitant at the idea of sales. I asked myself if I could be in a sales role and remain true to myself. Fortunately, as I learned more about Salo and their mission, it became clear that doing what’s best for their clients and consultants was always priority one. Being able to focus on the relationship and not the transaction gave me confidence that I could be successful without letting go of what was important to me.

Being a BDD has unlocked a new drive in me. The ability to connect with others on a genuine level and help them solve their business problems is just the way I want to spend each day. For so long I considered my skillsets to be mostly technical because of the field I was in, however, becoming a BDD has shown me that I’ve always leveraged interpersonal skills, just in a different way. It has been such a fulfilling realization to find a career that requires me to use the strengths I want to be using.

Speaking of strengths, a BDD must be ambitious. As a BDD your daily activity comes from your drive to pursue a positive outcome for your clients and consultants, so sitting back and waiting for the work to come to you is not the path to success. A good BDD will have a natural curiosity, is good at asking questions and listens intently to the answers. Lastly, resilience is key. Not every opportunity works out the way you expect it to, so having the ability to learn from, and then move past, the low points becomes very important. In business development, it’s all about crafting a successful solution, and the reward that comes with helping clients solve business problems and consultants fulfill their career goals – there’s just nothing quite like it.

Interested in the Business Development Director role? Learn more about it.